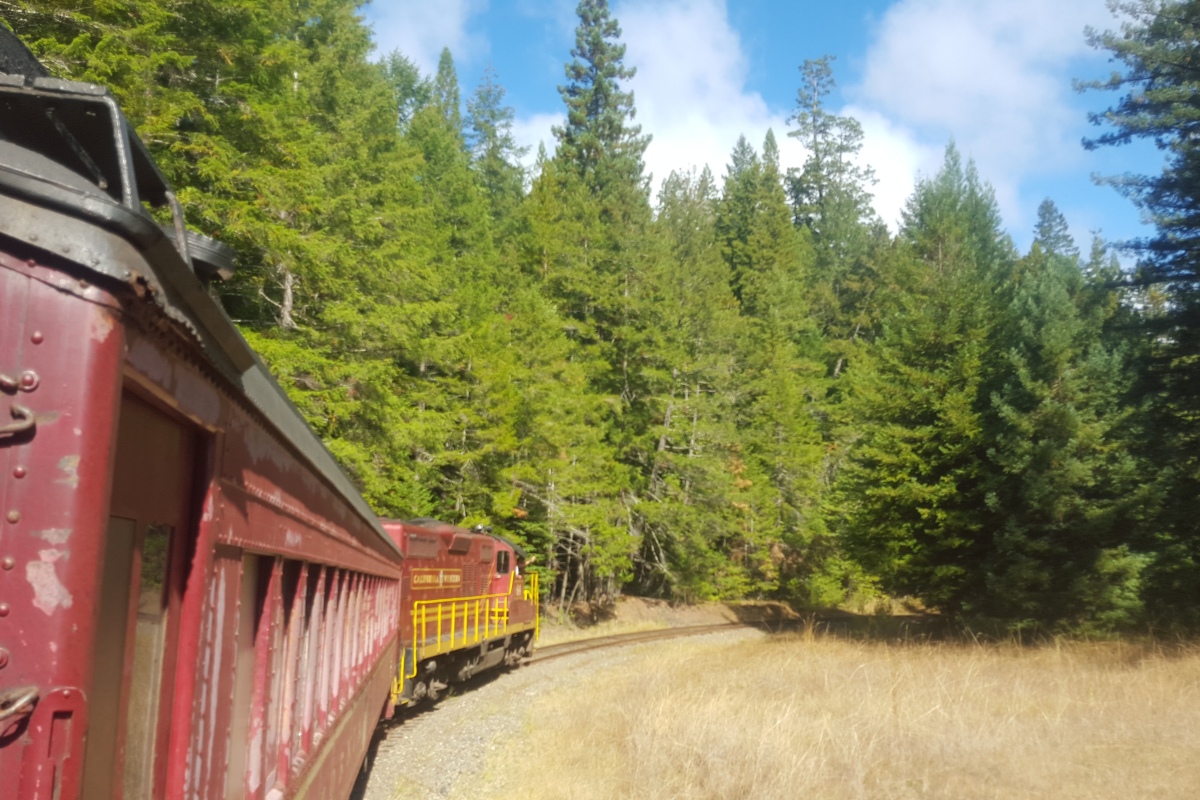 The train whistle pierces the sharp September morning air.  When the Conductor shouts “All Aboard!” I know that I am really experiencing a slice of American history.  I am in Willets, CA, the boarding point for the “Skunk Train,” a nineteenth-century steam engine passenger train which will take a small load of passengers, mostly seniors, on a voyage deep into the Redwood forests.

The trip, taking about five hours, will be a 4.5 mile loop, through forty miles of forests, scenic mountain meadows and over thirty trestles that bridge the pristine mountain waters of Northern California.  Along the way passengers will pass Redwood trees close enough to touch, and look deep into the dark, mysterious ravines that spawned the myths of Bigfoot.

The Conductor opens the door of the train car, and places a small step down to shorten the first step onto the train.  Passengers step forward to board, taking the Conductor’s hand to enter into the world of the train.  The Conductor, wearing a billed cap, badge, and sharp white shirt and vest, has a twinkle in his eye.  Although he has probably invited passengers onto his train thousands of times, it is obvious that he still is excited to share his love of the rails with them.  Upon boarding, I see that there are two enclosed passenger cars, along with one open train that allows passengers to stand outside and see the forest up close and personal.

“Do you know how a dog gets off of a train?  He disembarks!” 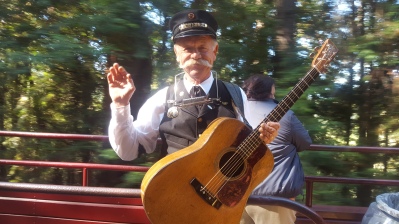 I hear a loud voice telling this silly joke, and inwardly groan.  Is this a passenger who will annoy everyone with his intrusive and silly comments?  Then I realize that the voice has come from another man in a uniform and train cap—and that this cap announces that he is the “Train Singer.”  As I turn to watch him, he tells all that he will provide entertainment for the trip, and that this is the only train in the world with a Train Singer, because he invented the job himself.  Ok, I say to myself, let’s see how this works out…

The train, which runs on steam on a narrow-gauge railway, begins to chug forward slowly.  As it moves away from the train station and picks up steam as it travels through the small town, I see locals in many of the homes standing at the windows and doors, waving as we rumble by.  In one house it is a mother holding a small toddler up to see the train; in another it is a group of very elderly residents who have likely seen the train leave every morning for more years than they can remember.  Clearly this is a town that celebrates the charm of train travel.

Picking up steam, the train quickly begins to climb as it moves away from the town.  Now the scenery is small growth forest, dense and very green from recent rain.  A scant few minutes later, the tall trees begin to appear and the tree trunks seem to grow in front of us.  The silence of the forest is punctuated only by the chug of the rails and the puffs of steam from the engine.

Suddenly I feel immersed in the forest in a way that I hadn’t felt before when I simply drove through the Redwood forests earlier in the week.  It is no longer enough to sit within the passenger car and simply look at the forest, so I move to the outdoor car and stand along the rail with other passengers who have the same look of wonder on their face that I have.

I lean back, looking up and trace the tops of the tall trees reaching for the sky.  The support of the side rails on the train car provides me the opportunity to continue to look upward until I become almost dizzy on the beauty of the tops of the trees so high above my head.  I can smell the dense undergrowth, and can glimpse small animals along the route; wild turkeys, possums, a glimpse of several deer in the short distance.  The Conductor points out the oldest trees along the route, some of them 800, 900 and even over 1000 years old.

As the train begins to navigate the many switchbacks that will bring us to the summit, we roll into sun-filled valleys. Ringed by tall trees, these meadows have small streams that sparkle in the light.  There will be 14 switch-backs along the route, taking the train up over 1000 feet in altitude.  Along the way we see a few abandoned cabins that are close to falling down, and the Conductor tells us stories of the logging times when this forest was key for building towns along the coast.

“Good morning, America, how are you?
Say, don’t you know me? I’m your native son
I’m the train they call the City Of New Orleans
I’ll be gone five hundred miles when the day is done”
Guthrie Arlo – City Of New Orleans Lyrics | MetroLyrics 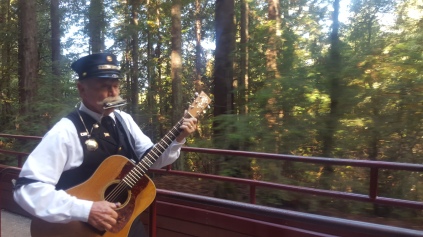 The Train Singer, also known as Greg Schindel, comes out onto the open platform singing, and suddenly it all makes sense.  The only thing that can improve this experience is to have the soundtrack of our country’s railroad songs in the background.  Now 71, Greg has been singing on the rails for almost thirty years.  Billed as a “visual and performing arts specialist,” he also serves as the music director at the local high school.  He rides the rails four days a week, entertaining as he passes through the rail cars.  Over the years he has built a broad based collection of popular and traditional train songs which he performs on guitar, harmonica and whistles to the delight of passengers.  I soon find myself singing along with the rest of the passengers, hearing songs that I haven’t heard, or sung, since childhood.

Soon Greg has brought the passengers together as we talk, laugh, and share our excitement over the scenery.  I find out that one couple lives in the mountains north of Colorado Springs, very close to where I was raised.  The husband knows all of the old teenage haunts that I went to, and can tell me whether they are still standing today.  As we compare dates, we discover that he even was a bouncer at the college bar that I favored—we probably knew each other by sight if not by name forty years earlier.   Talk about a small world!

The best part of this exchange is that it brings me, a solo traveler, into the group of others who are traveling in pairs.  Suddenly I have a small community on the rails. I can’t help but think that rail travel in the first half of last century must have encouraged this type of personal interaction, much more than today’s air travel where everyone is tuned out, plugged in, or staring at small screens.  I am grateful for the music, the conversation and the smiles which enhance this experience as much if not more than the music and scenery.

At noon we stop at the top of the pass and disembark for an hour to stretch our legs, eat lunch, and look around.  The railroad has established a small camp there, and we quickly smell the grill cooking hamburgers.  We eat at picnic tables under the sun, talking and stretching to enjoy the fresh mountain air.  Greg gives an impromptu concert, bringing out a squeeze-box that causes even the birds in the trees to join along.

After the Conductor has performed the chores necessary to switch the engine to the front of the train, we all reluctantly board again for the return home.  Most passengers elect to sit in the enclosed cars, lulled into a sleepy mood after the great lunch.  The mood is quieter for a while, and we settle into the silence of the forest.  But gradually various passengers move again to the open car, trying to catch more of the forest before the train returns to the bustle of Willets.

Greg comes out onto the passenger car, and begins to tell jokes that wakens everyone with bursts of laughter.

“What do you call a line of rabbits walking backward?  A receding hairline!”

When Greg breaks into Johnny Cash’s Folsom Prison, the entire car sings and claps loud enough to waken even the black bears that live in the meadows.

I hear the train a comin’, It’s rollin’ ’round the bend,
And I ain’t seen the sunshine Since, I don’t know when…

We all grin at the words of the chorus:

But I shot a man in Reno, Just to watch him die
When I hear that whistle blowin’ I hang my head and cry…

I don’t know why we all enjoy that chorus so much, but perhaps it reminds us that America was built on the backs of rough men who lived hard and died way too young.  It seems eons away from the cushy lives that we have nowadays, where men need to go to the gym to build muscles and no one walks anymore.  Or perhaps it is evidence that we all love a “bad boy” and love to live through the drama of the lives of others.  Either way, even the oldest women on train sing the chorus with glee.

All too soon the train begins the final descent and slows down as it approaches town.  I am somewhat surprised to see cars and houses—in a few short hours in the forest I was able to forget the chaos of modern-day.  As we roll slowly past the houses we again see the people who waved to us earlier in the day.  I enthusiastically wave back.  They welcome me home and back to the real world.

This is a text widget, which allows you to add text or HTML to your sidebar. You can use them to display text, links, images, HTML, or a combination of these. Edit them in the Widget section of the Customizer.